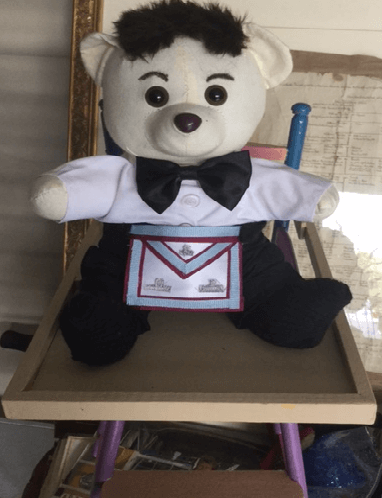 Ted E., Bear was born to Mr. and Mrs. Bear in 1999 and as a Lewis joined his Father and Grand Father's Mother Lodge as soon as he turned 18 years of age.

As can be seen from his picture here, Ted is a Past Master, but like most young people these days, dear Ted has lost his Jewels. His Grandpa, as is customary for all Grandpas, of course will fund the replacement of these lost Jewels.

Ted has now affiliated with the Koolpinyah Craft Lodge No. 241, and Darwin Mark Lodge No. 51.

When he heard about the  "Extravaganza Mark Lodge Meetings" in Mt. Isa on the weekend of Saturday 29th September 2017 and Sunday 30th September 2017, Ted invited himself along for the ride with MWBro. David Crawford PGM and RWBro. Ian Pontifex PDGM driving from Darwin. (He was quietly hoping to receive some Grand Rank at these Meetings.)