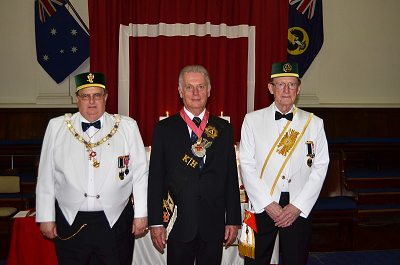 Blessed Trinity Sovereign Chapter No. 201 of the Ancient and Accepted Scottish Rite for Australia celebrated the 40th Anniversary of it’s Consecration at the Meeting in the Glover Room of Freemasons Hall on 22nd November 2016 when Ill\Bro. Michael Olive 30° was enthroned as Most Wise Sovereign by Ill\Bro. John Mercier 31°, the previous Most Wise Sovereign.

Following the Enthronement Ceremony, a Ceremony of Remembrance was held for Ill\Bro. John Norton-Baker 30° Member Emeritus led by V\Ill\Bro. Neil Jensen 33°, the District Commander, with the Eulogy being delivered by M\P\Bro. Brian Dohnt 33° Past Sovereign Grand Commander of the Supreme Council for Australia.

The Regional Commander, M\Ill\Bro. Andrew Charlton 33°, Grand Registrar of the Supreme Council for Australia presented a five Year Bar to his 50 Year Membership Jewel to Ill\Bro. David Fewster 32° Companion of the Order of Merit.

The Altar which had been refurbished by Ill\Bro. Michael Olive 30° and a new Altar Frontal presented by him to mark the 40th Anniversary of Consecration were blessed by the newly invested Prelate, Ill\Bro. Rev. Peter Garland 32° Member of the Order of Merit.

After the working of the Third Point by the new Most Wise Sovereign, the Chapter was closed and the Brethren went to the Chandelier Room for the Refectory where the customary Masonic toasts were honoured. Ill\Bro. David Fewster 32° recounted some of the events surrounding the formation and consecration of the Chapter and E. & P. Bro. Victor Daminato 18° proposed, as has become customary in this Chapter, the Toast to Frederick the Great, who ruled Prussia from 1740 to 1786 and under whose titular direction the Grand Constitutions of 1786 under which all regular Supreme Councils are formed and are bound are said to have been promulgated. 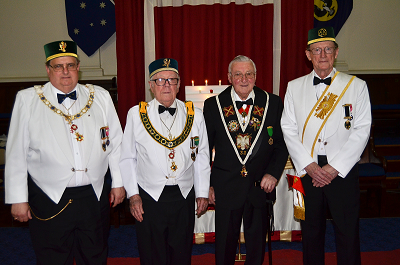