Both Larrakeyah Royal Arch Chapter No. 40 and Katherine Lodge of Fidelity No. 217 held meetings in Katherine on Saturday 3rd December 2016.

Larrakeyah Royal Arch Chapter No. 40 has held its December meeting in Katherine for the last three years, and in each year has held the Excellent Chief and Red Cross of Babylon Degrees.

This year Sir Knight John Matthews was installed as an Excellent Chief and Companion Philip Tedesco was admitted to the Degrees of the Order of the Red Cross of Babylon. 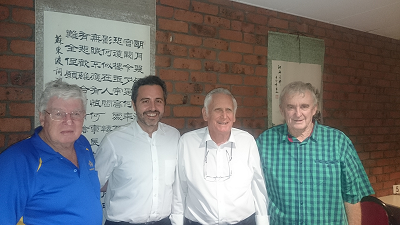 The Katherine Lodge of Fidelity No. 217 Craft meeting followed the Larrakeyah meeting – and then all Brethren, Companions and families celebrated the festive season at the Regent Court, Chinese Restaurant.