The Brethren in all Masonic Orders lament the falling numbers in Membership, which forces many Lodges to hand in their Warrants or, as some have done, hold Combined Meetings with other Lodges. This is exactly what Sir Samuel Way Mark Lodge No. 46 and Witton Mark Lodge No. 55 have done. Both Lodges have benefitted as a result.

This story is not about falling numbers. It could, however be about some of the benefits of Combined Meetings, which may alleviate some of the negatives of falling Membership. 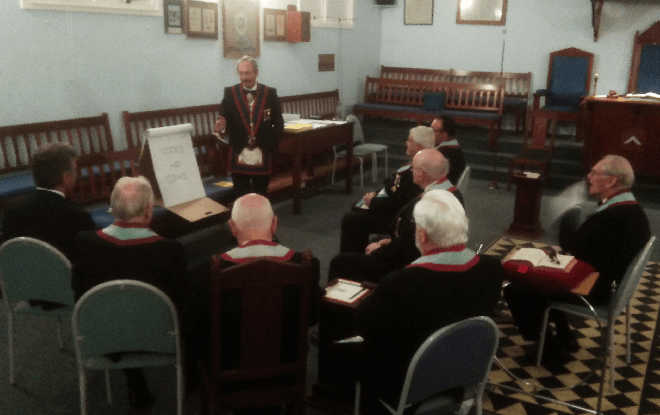 The abovementioned Lodges have set an example. Fearing that falling numbers would ultimately result in the demise of both Lodges, the Executive of both Lodges met in late 2013 to discuss the possibility of holding Combined Meetings and an agreement was reached and the first Combined Meeting of the Lodges was held in March 2014.

While attendance is still an issue, with an average of ten Brethren at each Combined Meeting, there is still an air of ‘Bon Homie’ in the Temple and particularly at the Festive Board where many varied and thought provoking discussions ensue.

Sir Samuel Way Mark Brethren consider themselves to be very fortunate indeed in having recently gained RWBro. Nick Vesotsky as a Joining Member. Not only is RWBro. Vesotsky DGM of the Grand Lodge of Mark Master Masons of South Australia and the Northern Territory of Australia, but he is also a Grand Lecturer.

With a Grand Lecturer present it didn’t take long before RWBro. Vesotsky was cajoled into presenting a lecture, which he did at the recent Combined Meeting at the Blackwood Masonic Centre. RWBro. Vesotsky’s subject was “Codes and Coins”. The subject matter was predominantly related to the Mark Degree’s cipher, which varies significantly from the Craft cipher.

(Sir Samuel Way and Witton Mark Lodges meet on the third Thursdays of March, May, July, September and November alternately, at either Blackwood Masonic Centre, Blackwood or