A special and unique meeting between Darwin Mark Lodge and Trinity Mark Lodge (Cairns) was held over a weekend in September 2017 in Mt Isa, Queensland. This was the culmination of many hours of planning and travel by the Organisers and was an extremely successful and enjoyable occasion. Both Grand Masters, MWBro. David Kitching and MWBro. Cliff Isted were in attendance, accompanied by a number of Grand Lodge Officers from both Jurisdictions. Thirty five Mark Master Masons and a number of partners from Queensland, South Australia and the Northern Territory travelled enormous distances to enjoy each other’s company and participate in Masonic Ceremonies.

The gathering commenced on the Friday evening with a “Meet and Greet’ with new friendships being made and old ones re-kindled. Masonic Ceremonies were held on Saturday with three Meetings being conducted, commencing at 9:30 AM with an Advancement Ceremony by Darwin Mark Lodge for Bro. David Brennan of Lodge Foelsche. Both Grand Masters, together with their retinues were escorted into the Lodge under the direction of RWBro. Kevan McRae, GDC, and introduced to the Worshipful Master, VWBro. Colin Hallenstein. At the conclusion of this meeting a light luncheon was taken. 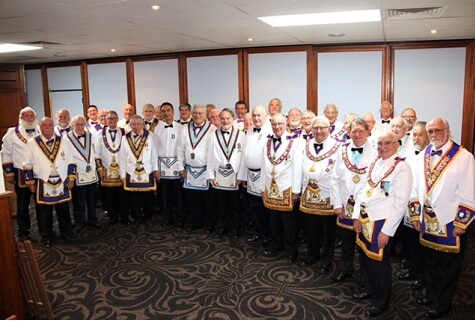 You could also check the following.

The Brethren then re-assembled for an Advancement Ceremony, conducted by Trinity Mark Lodge for Bro. Vincenzio of Cairns. Both Grand Masters were admitted and introduced by the acting GDC, MWBro. Gary Fenton, PGM. Brethren of SA & NT assisted in the Ceremony which contained some interesting differences in procedures.

After a short break the Brethren were again called back to the Lodge to witness and participate in the Installation of WBro. Chris McLelland of Trinity Mark Lodge. The Ceremonial was conducted by the Grand Master, MWBro. Cliff Isted and Officers of the Grand Lodge of Mark Master Masons of Queensland.

The Brethren then retired to change into informal attire and meet with the Ladies for a Banquet at which the usual Toasts and Speeches were given. Of note was the rendition of the “Master’s Song” to the new Worshipful Master of Trinity Mark Lodge by RWBro. John Watson, MWBro David Kitching and RWBro. Les Pilton. Both Grand Masters were presented with wooden plaques in the shape of a map of the Northern Territory, which had been fashioned from the flooring of the Darwin Lodge Rooms. Congratulations for a “job well done” were given by the Grand Masters to the organising committee of RWBros. Ian Pontifex, Kevan McRea and Duncan Walker (Qlueensland).

In summation it must be said that the entire experience from leaving home, travelling huge distances, participating in the Ceremonial and the Festivities and then travelling huge distances to return home was something never to be forgotten. The attention to detail by the Organising Committee paid off and the chosen venue of the Ibis Styles Motel, were all Functions were held, was exemplary.