An Intergenerational Night to Remember

"I recall the moment well.

It was in the middle of our Top-End wet season and a typical balmy afternoon. My dad was up from Rockhampton and Les, a mate of Scottish extract, was visiting from Sydney. Another good mate, Steve was over, as well as my two boys, William and Henry (Steve and Les are their Godfathers).

We were doing what most blokes do, in the downtime in the Darwin wet – hanging out by the pool, drinking cold beer having a few laughs.

Dad, Steve and I are all Freemasons, but it was Les who bought up the topic.

“So when are you boys gunna ride the goat?” he asked.

William (20) and Henry (19) laughed and said they were both up for it, providing Les was too.

I had often spoken to the boys about Masonry, but this time was different. They were now the right age; Dad, RWBro. Christoph Tollner PAGM, had agreed to come up and if possible conduct the Ceremony; and I was again Master of Darwin Lodge of Remembrance - which certainly aided in some of the organisation.

Because they were my children (and I was their Proposer) I took a large interest in planning their Initiation. It was a much-needed re-education on the enormous amount of work our Lodges do to bring in new Members. Paperwork, Fees and Dues, Committees of Inquiry, a Dispensation for Dad to conduct the Ceremony, Propositions and Ballots, all needed to be taken care of.

I am thoroughly thankful to all of my Brothers, both in Darwin and Grand Lodge, who were involved in completing these tasks. It made for a memorable night - and the night was memorable in so many ways.

On Friday the 19th of May 2017 at Darwin Lodge of Remembrance, more than forty Brethren were in attendance, including a dozen or more from Grand Lodge. Three visiting Masters and their teams also came along and at the end of the Ceremony seven Entered Apprentices and a Fellowcraft were standing in the room.

It was unfortunate that our regular Inner Guard and Deacons were all called away for various reasons. Bro. Steven Doherty however was more than keen to fill the Inner Guard spot and admit his Godson into the room. Family friend, RWBro. Dr Neil Jensen PAGM, had earlier informed me that he intended to be there for my boys' Initiations, and he agreed to step into the Senior Deacon’s position.

For ease of purposes, I arranged for Dad to sit in the Junior Deacon’s chair at the opening and closing of the Meeting. Before the Ceremony took place, I asked my father to take over the Master's Chair and then I filled the vacant Junior Deacon’s office. I felt really honoured to be the conduct for my own sons' Initiations.

The Ceremony went without a hitch and all of the people involved were well prepared and did their work magnificently.

In complete accord with the South Aistralian and Northern Territory Ritual, my father demonstrated all of that skill and ability learned over five Decades in Freemasonry. The words, rhythm and tone seemed perfect and I would swear that when he was doing the Obligation he had a tear in his eye!

I was so proud to see Dad and Darwin Lodge of Remembrance perform well in front of VWBro John Matthews, his large team of Grand Lodge Officers and the visiting Worshipful Masters.

After I had resumed the Chair and closed the Meeting, everybody seemed to be slapping everybody on the back. Some said we had made history.

“When was the last time you saw three generations from the same family in a Lodge?”

“When was the last time you saw a Master place his father in the Chair so he could Initiate his two grandsons?”

“When was the last time you saw seven Entered Apprentices at a Meeting?”

“When was the last time you saw two PAGM’s sitting in the Deacon’s seats?”

“When was the last time more than forty people attended a Darwin Lodge of Remembrance Meeting?

These and other questions were being asked and everyone seemed to feel they were part of something memorable.

Since that night, I’ve had the opportunity to reflect on it with William and Henry. They were awed and overwhelmed by it. “It was all a bit weird.” Henry told me.

So much of it rushed over their heads and they really could not take it all in, but they know they are part of something important. They are both keen to progress and are already preparing each other for their Second Degree.

There is also more in store for the Darwin Lodge of Remembrance. I am told there are papers in the mail from Les, my friend of Scottish descent from Sydney. He’s keeping his end of the bargain and it will soon be his turn to ride the goat." 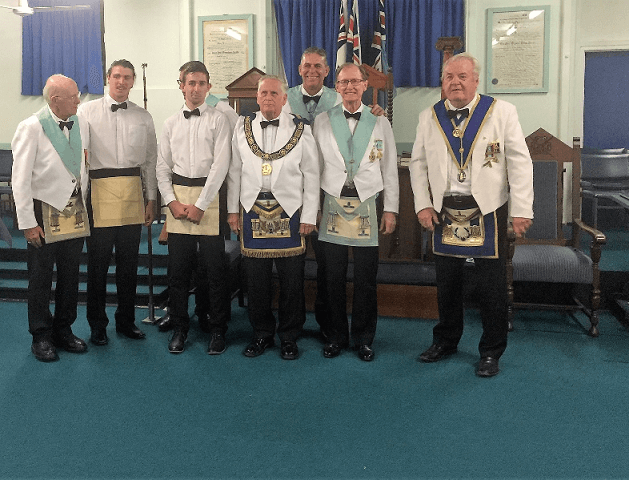 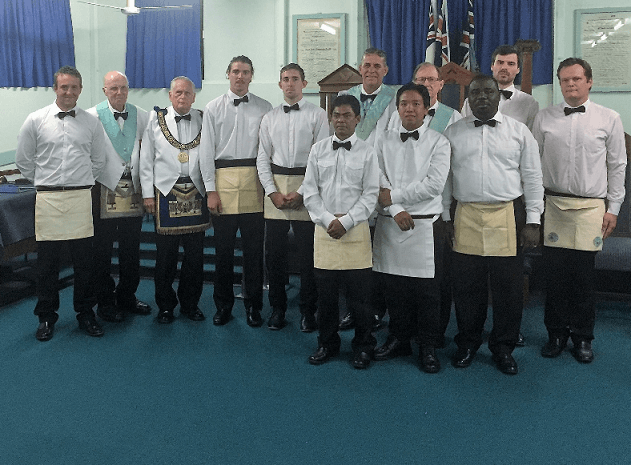