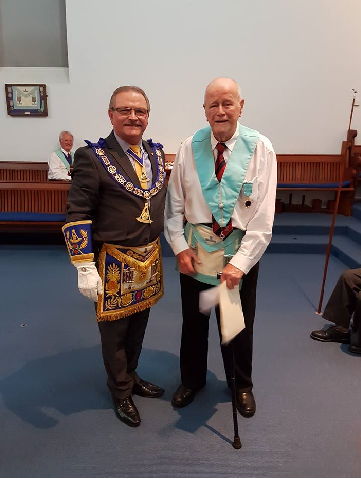 On the 10th February 2017, VWBro. Gordon Maxwell Andrews PDGS was presented with his 50 Year Jewel by the MW Grand Master, Stephen Michalak at the Ridgehaven Daytime Lodge in the Ridgehaven Complex.

It was an extremely hot day for the Presentation by the MW Grand Master, and his esteemed helper,  the VW Brother Keith Perrott DGS.

Both of these poor Brethren had to endure wearing jackets on a day where the mercury reached 42 Degrees; the airconditioning unit had broken down and this important event became a long and tiring  meeting for all in attendance.

VWBro. Andrews however, still considered it an honour and was extremely proud to receive his Jewel.  He beamed throughout the Ceremony, albeit suffering the heatwave.

There was much toasting at the Festive Board following the meeting and VWBro. Andrews continued in his role as Treasurer by collecting money and selling tickets.  All done with that same smile!

VWBro. Andrews is a very likable Brother and is very well known in Masonic circles, not only in South Australia but also Interstate and Overseas.