A memorable day that will always be in my heart". With these words, the Grand Master of the Grand Lodge of South Australia and the Northern Territory, MWBro. Stephen Michalak was greeted with a handshake and a warm fraternal embrace by the Grand Master of the Grand Orient of Italy, Stefano Bisi who received the visitors from South Australia on Wednesday morning 18th October 2017, at an Official Visit which took place at Grand Lodge headquarters  “Villa Il Vascello” in Rome.

Welcoming the guests from the Grand Lodge of South Australia and Northern Territory, were Michele Pietrangeli, Grand Secretary, and the Grand Representative of the Council of the Order, Fabrizio Cartwright. 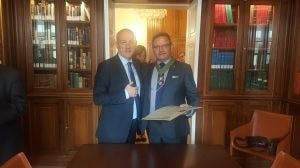 The Australian Delegation visited the National Headquarters showing great interest in the “Sala Giunta” which displays paintings of the past Grand Masters - starting from the first being Garibaldi; the Paolo Ungari Library, and smaller Library which was only opened a month ago and aroused great admiration.

Bisi in what was an emotional event for all concerned - presented MWBro. Michalak with the Giordano Bruno Athena Collaret, which is the highest honor the Grand Orient of Italy can present a Brother.

The Delegation visited the grounds of "Villa Il Vascello”  (the Grand Lodge building) and showed great interest in the plants and rare trees that characterize the vast green area of the Villa.  One of the trees admired actually is approximately 2000 years old!