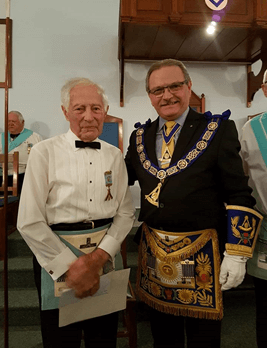 WBro. Polden was initiated into Freemasonry at Sir Samuel Way Lodge No. 48 on 10th September 1941. He became a Master Mason on 12th February 1942. He worked his way through the Officers’ Chairs in the Lodge and became Worshipful Master on 12th November 1947.

His employment with the Department of Agriculture took him into Rural Areas and he joined Riverton Lodge in the Mid-North to enable him to nurture his love of Freemasonry.

He worked for the Department of Agriculture for fifty years where he had branched into Land Broking and before retiring at the age of eighty-four years, he wrote the History of the Department.

Apart from family, work and Masonic commitments, WBro. Polden in his younger days was a keen Ballroom Dancer. He later developed a passion for Golf and still plays regularly at Belair Park Golf Club.

WBro. Polden has always maintained a keen interest in Sir Samuel Way Lodge No. 48 and was made an Honorary Member of the Lodge many years ago. Unfortunately due to several factors and needing to take care of his wife he has not been able to attend Lodge regularly over the past few years.

The Lodge is proud of WBro. Polden's achievement of gaining a Fifth Bar to his Fifty Year Jewel – Seventy five years Membership is certainly significant! 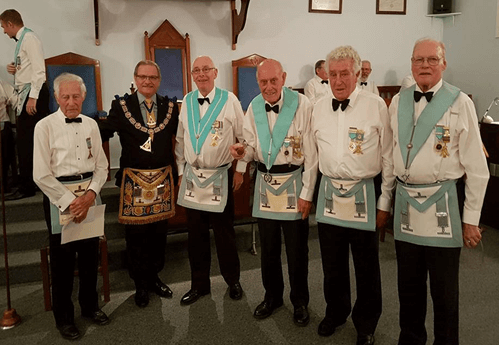 (Above) In this Group is evident 305 years of Masonic Service