A Night to Remember at Corinthian Lodge 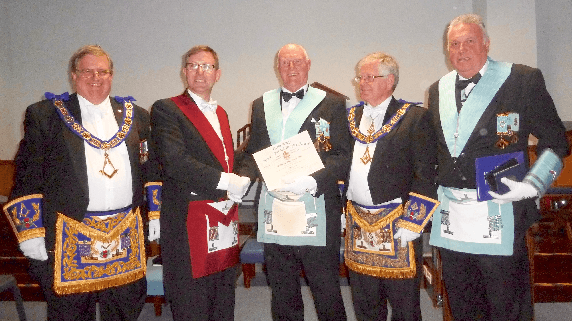 It was certainly a night to remember at the July 2017 Meeting of the Corinthian Lodge.

The Presentation of a Fifty Year Commemoration Jewel to WBro. Alan Wells by RWBro. A. Charlton AGM was one of the highlights.  He commented that WBro. Wells had proven to be  ‘an active Fifty Year Veteran’ as was seen by not only his past activities in Freemasonry, but also his continuing present day involvement in ‘several Orders’.  His active role as the Director of Ceremonies with the Corinthian Lodge over many years was also a continuing Legacy to Freemasonry.

Family and friends were invited into the Lodge Room after the closure, to witness the Presentation. Alan’s wife and daughters were in attendance as was his nephew Craig, who acted as escort Grand Lodge Steward. At the Festive Board, congratulatory toasts were presented and honored by Brethren, Family and Friends.

D. Coshall, WM, with a Past Master's Jewel  from  the Lodge’s past history.  He is shown in the photograph above wearing the Jewel (worn by the WM for the first time!) but originally presented in 1925 to WBro. H. J. Basham.  It will now become the Perpetual 150th Year Jewel to be worn by subsequent Masters and will be known as the ‘Basham Jewel’.