Presentations at Glenelg Lodge No. 117 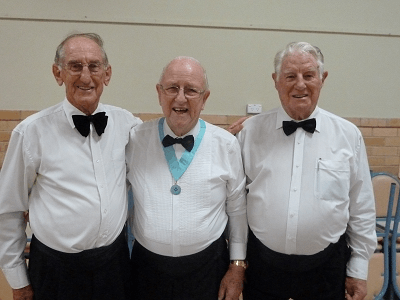 On Thursday 9th February 2017, immediately following the closing of the Regular Meeting of Glenelg Lodge No. 117, non Masonic visitors were admitted into the Lodge Room for Presentations of a Veteran 5 Year Service Bar, 50 Year Veteran Service Jewel,  and 25 Year Service Pin.

Veteran 5 Year Service Bar to WBro. Reg West: WBro. Reg West was initiated in Torrensville Lewis Lodge No. 104 on the 25th of February 1957 and Installed as Worshipful Master in May 1974. When the Lodge closed in 2006, WBro. West joined Glenelg Lodge No. 117.

50 Year Veteran Service to Bro. Colin Reynolds: Bro. Colin Reynolds, was initiated into Torrensville Lewis Lodge No. 104 on 23rd January 1967.  This Lodge reverted to a Daylight Lodge in 1986, so he then joined Glenelg Lodge No. 117 on 12th February 1987 and has been an excellent Ritualist and supporter of the Lodge. VWBro. Don Jury presented him with his 50 Year Veteran Service Jewel.

25 Year Service Pin to WBro. John Kirby: WBro. John Kirby was initiated into The Perfect Cube Lodge No. 201 on 7th June 1991 and moved to Queensland where he became an affiliated member and subsequent Worshipful Master of Maroochydore Lodge No. 392 (QC). Returning to South Australia, he joined Ardrossan Lodge No. 150 followed by Glenelg Lodge No. 117 on 12th February 2015. He was presented with a 25 Year Service Pin by Worshipful Master, VWBro. Des Baker.