On Saturday 2nd September 2017 the four Lodges that meet at Edwardstown Masonic Centre held a combined Social Event  - their first attempt at a joint venture like this.

It was a fun night and in no small part due to the organisation of Jim and Val Greenfield who are very competent at organising such events and ensured that it all ran smoothly. 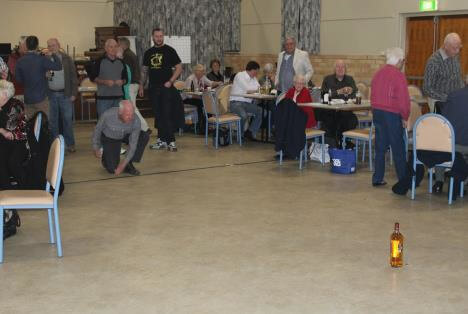 Although only about fifty people attended, a total of $1,016.95 was raised.  This amount included Donations from several individuals - some who were unable to attend -  and a generous Donation from Edwardstown Lodge No. 168.

Application for Assistance was submitted to the Freemasons Foundation so that a larger sum of money could be donated to the Neil Sachse Centre to assist with the funding of their "Project Discovery". This resulted in a cheque for $2,5000 being finally presented by Robert Clyne, OAM PGW, Executive Director of the Freemasons Foundation in the company of several Brethren.

A short Presentation about this particular Project was delivered by Ryan Mann on the night.

Ken Jenkins from Edwardstown Lodge No. 168 was the best ‘tosser’ of the night to win the large bottle of Whisky (see above) whilst the table of guests organised by Brenton and Chriss Hand won the First Prize for the Quiz.