WBro. Jaan Neps, who will be 93 years old in October 2017 was presented with his 50 Year Jewel on Sunday 19th June 2017 by the Deputy Grand Master, RWBro. Bill Merrill, at the Eldercare Sash Ferguson Complex, Mt. Barker.

WBro. Neps, an Estonian by birth, witnessed the invasion of his Homeland by the Russians, then the Germans and then again the Russians, eventually emigrated to Australia in 1949.

He was recruited by the South Australian Railways.  He lived at the "Tent City" which was located at the new RAH site, inducted into S.A.R. procedures at "Bonehead College" (The S.A.R. career was Porter (Adelaide Station), Signal-man (Dry Creek, North Adelaide and Port Adelaide), then Guard (Adelaide Metro, Victor Harbor, Gladstone, Eudunda and Bowmans). He retired in June, 1983.

His Masonic Career has been extensive.  He is a 32 Degree Freemason.  He was Initiated into Railways Lodge in 1967, became Worshipful Master in 1976 and 1977, continuing his Membership in Pentalpha Lodge and is at present a Member of the Prince of Wales Lodge, Mt Barker.  He served as Worshipful Master of Prince of Wales Lodge, during 2002 and 2003.

WBro. Neps was exceedingly pleased to receive his 50 year Jewel and proud that the Presentation was made by the Deputy Grand Master.  Grand Lodge Dispensation was granted for the Brethren to wear their Regalia in Public for this event. 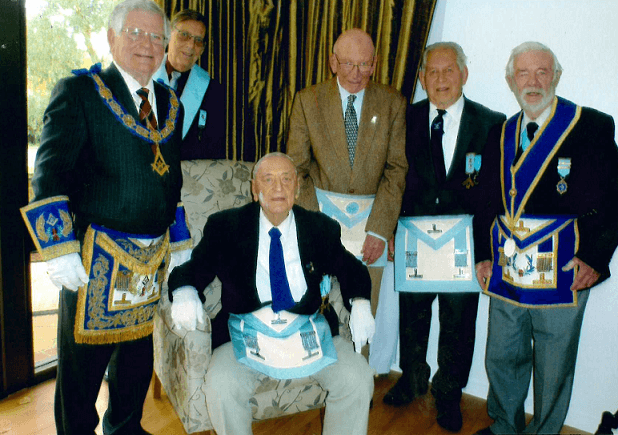