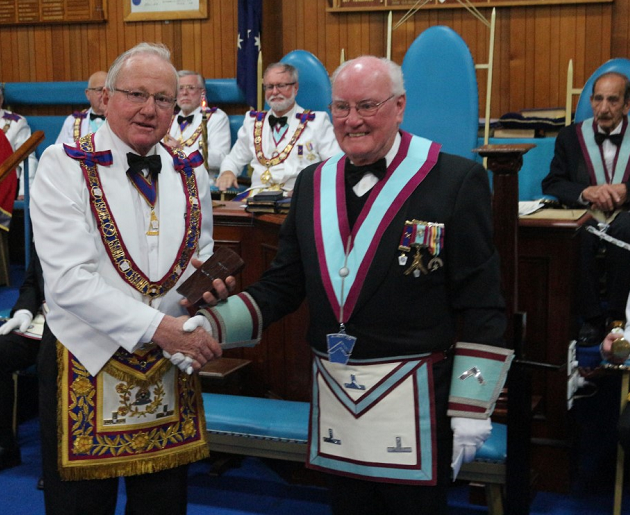 Before closing the Installation meeting of Salisbury Mark Lodge No. 52 on Tues 18th November 2016, the newly installed Worshipful Master, RWBro. Steve Winder PDGM made a presentation to MWBro. John Green PGM.  This presentation of a Special Gavel has reference to the Centenary of Mark Masonry in South Australia which was celebrated in 2006.

At that time special Gavels were made by the late WBro. Roly Filmer to commemorate this important milestone and were presented to each Mark Lodge in South Australia and the Northern Territory.

The late WBro. Lynden Beare, who was the Grand Master at the time, decided to visit the Northern Territory with a Delegation of Grand Lodge Officers and whilst there conducted a mini-Communication to familiarise the Brethren of the Territory with the workings of a Grand Lodge Communication, as some of them, by virtue of their distance from Adelaide had been unable to attend at any time.

At the conclusion of this mini-Communication, the Darwin Brethren were re-admitted, each carrying a Keystone made from material obtained from a Quarry where on a previous visit, a Ceremony had been conducted. Each of these Keystones was engraved with each individual Brother’s Mark. These were very graciously received and undoubtedly became treasured possessions.

In November 2015, South Australia experienced devastating bushfires at Pinery.  MWBRo. John Green, PGM unfortunately lost his house and possessions in that fire.  RWBro. Ian Pontifex PDGM of Darwin, a close friend of MWBro. Green PGM, decided to organise a replacement Keystone.  This was made not from Quarry Stone, but from floorboards from the Darwin Lodge Rooms.

It was this replacement Keystone that was presented to MWBro. Green PGM at the above-mentioned Installation of Salisbury Mark Lodge No. 52.