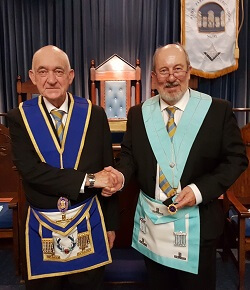 David was initiated into Lewis Lodge of Hope in Port Adelaide on the 26thSeptember 1962, Passed 26th March 1963, and Raised 25th March 1964. In 1964, David sought a Clearance to join Hyde Park – Bankers Lodge No 193 to become the Lodge Organist and has been the organist for the past 53 years except for the year he was Worshipful Master of the Lodge in 1995-96.

David has had a very distinguished career in Freemasonry receiving the Meritorious Service Award in 1980 and the title of Past Grand Organist in 2006. Over the years David has been a member of Torrensville Chapter, Henley Mark Lodge, Phoenix Mark Lodge, Grand Lodge of Mark Master Masons, Meridian Chapter, Eastern Districts Mark Lodge, Emulation Torrensville Chapter and Eudunda Lodge (where he is also Organist).

David has been a Grand Steward and a District Grand Superintendent.

David’s contribution to Freemasonry is however, far more than participating in ritual and conducting splendid harmonies, he is one of the most important Lodge members in interviewing potential candidates, imparting a comprehensive understanding of Freemasonry and the commitment required, and personal mentoring once a candidate is admitted. David also offers ongoing support to each new Master, ensuring there is continuity of Lodge plans, both short term and long term.

We congratulate David on his commitment and dedication to Freemasonry and have much pleasure in presenting him with this 5 year bar to his 50 year Jewel.