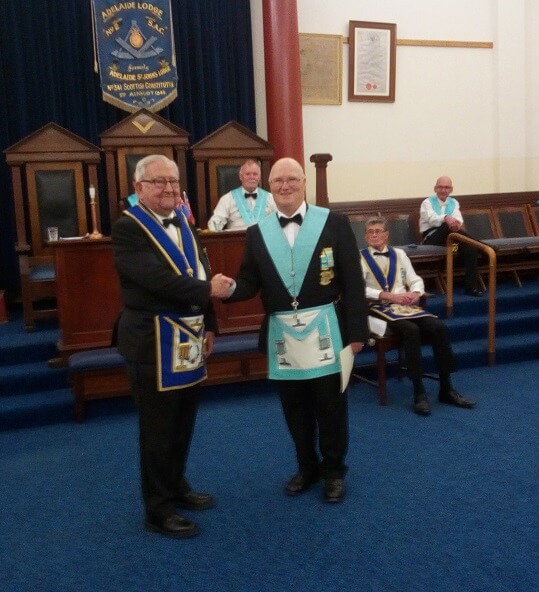 WBro. Macaulay was Initiated in Mannum Lodge No. 97 in November 1967.

In 1968 he became a Joining Member of Semaphore Lodge.

RWBro. Crawford PAGM was Lodge Secretary at that time. He was elected Tyler in 1978 and was Worshipful Master during the Centenary of Grand Lodge in 1984.

Before re-joining Semaphore Lodge in 2007, WBro. Macaulay served two terms as Secretary in Adelaide Lodge.  Currently he is Treasurer of Semaphore Lodge.

The Jewel WBro. Macaulay received was originally presented to Bro. George E. Heywood in 1962.  In 1988 it was re-presented to Bro. Heywood'd son, Bro. W. (Bill) H. Heywood.  Both father and son were Initiated in Adelaide Lodge. RWBro. Crawford PAGM was in attendance at both presentations.

When Bro. Bill Heywood PTTGLA his widow, Doris, offered WBro. Macaulay the Jewel. Having been caretaker of the Jewel for 27 years, WBro. Macaulay considers it a privilege and honour to be able to wear the Jewel as it now represents 150 years of Service to “The Craft.”