Salisbury Lodge No. 126 Honours Three of its Members

At the March meeting of Salisbury Lodge No. 126, three of its members were honoured. 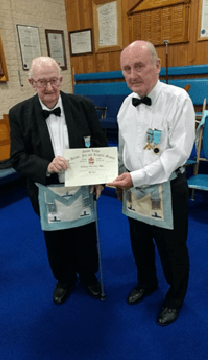 Currently WBro. Mayne is the Lodge Care Officer and the Induction Officer attending to the entered Apprentices, Fellowcraft and newly raised Master Masons. 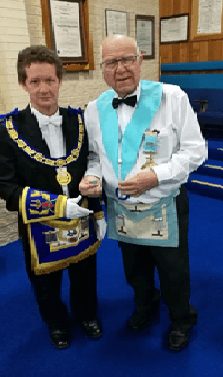 Next, WBro. Bill Penley was presented with his 35 year pin by VWBro. Keith Perrott DGS, Metro No. 2. (Pictured left).

Over the years, WBro. Penley has continued to serve the Lodge, taking on many officer's roles, as well as that of the DC.  Since this year's Installation on 7th April 2018 - he has taken the office of Senior Deacon.

WBro. Husker was initiated into Salisbury Lodge No. 126 in February 1993and has served the Lodge in most of the officers chairs.  He has served eleven years as Treasurer and for the past  five years he has been the Secretary.