On Monday 18th June 2018 the Assistant Grand Secretary VWBro. Dr. Richard Num PDGS, attended the meeting of the the Prince of Wales Lodge No.14 where he presented WBro. Paul Shillabeer O.S. with his Patent of Appointment as Representative of the Grand Lodge of  Grande Loja Maconica do Estado de Sao Paulo at or “near” our Grand Lodge.

The Grand Representative System was designed to foster and encourage a closer bond of union and fraternal accord between Grand Lodges of the world by helping to establish the true spirit of Brotherhood and by promoting the principles of Masonic universality.

Brethren planning to travel to the Jurisdiction may turn to the local Representative for information about visiting Lodges, factual information or contacts which will be helpful to them.  Thus appointment as a Grand Representative affords a new and different opportunity for “making a daily advancement”.

Basically, the job of being a Grand Representative entails a responsibility of communication; a challenge of public relations; an ability to be a fount of knowledge; and a continual satisfaction in being a force in “spreading the cement of brotherly love”. 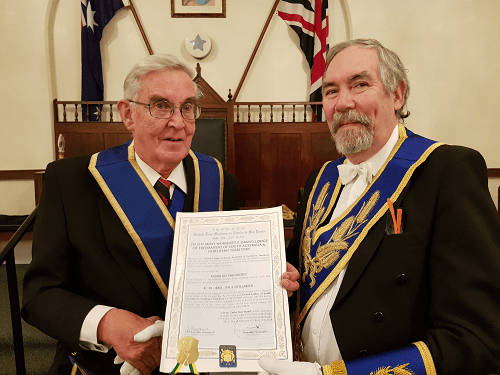 Installation of Three New Principals at Mid North Chapter No. 9

At the Installation of Mid North Chapter No. 9 on 19th.July 2018, three new Principals were Installed into their respective chairs after a long period of rotating former Excellent Companions.

Ceremony of Passing at Renmark Lodge No. 55