Following a Second Degree Ceremony for the passing of four candidates.

Worshipful Master, I thank you for your good work by way of livening our great organisation and also to thank you and your team for what has been a wonderful meal, and to share in the friendship, which is the essence of why we are here, by seeking to do good in the world, and to improve the brethren by strengthening their character, their moral and spiritual outlook, and to broaden his mental horizons.

The Lodge of Saint John at Strathalbyn was formed in 1866 number 1240 under the English Constitution. The brethren travelled to Adelaide to the United Tradesmen’s Lodge which was the sponsoring Lodge and the local police sergeant Paul Heinrich Matthias Foelsche. was the founding senior warden, and he was installed as Master in 1869. Lodge St John was one of the 30 Lodges which formed the Grand Lodge of South Australia in 1884. Lodge of St John No. 15 in our constitution was established on 1st June 1886, the original English warrant was sent to England for cancellation, returned and proudly still hangs in the Lodge at Strathalbyn.

Inspector Foelsche was born in Hamburg, like my forebears and arrived in South Australia in 1854 soon after my great great grandfather Adolph Schluter. In November 1856 Foelsche joined the South Australia Police and was sent to Strathalbyn as Mounted Trooper early the following year. He assisted in the building of the police station which still stands today and is now the local museum.

On 5 January 1860 he married Charlotte Georgina Smith in the Methodist Church at Strathalbyn and they had two daughters Mary and Emma.

While at Strathalbyn he arrested one of bushranger Captain Thunderbolt’s accomplices and gained enormous local respect for his policing skills. While based at Strathalbyn he was appointed sub-Inspector of the newly formed Northern Territory Mounted Police, a significant promotion which carried with it an enormous responsibility.

Prior to leaving Strathalbyn the local community honoured him with a farewell dinner attended by more than 50 people. He had endeared himself to the local community and was skilled in firearms and had accrued the reputation for competent dentistry. He had a large collection of the finest dental instruments.

He sailed from Port Adelaide to Darwin aboard the three masted barque Kohinoor arriving in January 1870 and discovered there was no police station so immediately set about building the very first police station in the Territory. A petition for South Australia to annexe the Northern Territory was ratified in 1863. After establishing a modest home at Palmerston he sent for his wife and two daughters.

He adapted well to the difficult environment and set an example to the settlers, was a keen photographer and made a massive collection of photographs of Aborigines and he was a great force in the community.

Just a few years’ ago I visited the Australian Archives in Canberra where a collection of Foelsche's work was on display in a special exhibition to recognise the valuable contribution he made to the preservation of Aboriginal culture and customs. The travelling exhibition was titled ‘The Policeman’s Eye’. He has been described as an excellent conversationalist and became an encyclopaedia on Northern Territory affairs and its people and was said to be the best lawyer outside the South Australian Bar with a commanding knowledge of law.

The first meeting of the Port Darwin Lodge was in 1896 and 18 Freemasons were present in the upstairs lounge of the Victoria Hotel. It was not possible for anyone from Grand Lodge in Adelaide to be present even for the consecration. WB Foelsche consecrated the new Lodge following a dispensation and took upon himself the obligation of its foundation Master and then invested his wardens and other officers.

In 1900 he was honoured with the conferred rank of PSGD.

He is at the foremost of Australian colonial photographers.

According to RWB Robert Clyne’s highly acclaimed ‘Colonial Blue’, the definitive history of the South Australia Police Force, and published in 1987, Foelsche had full control over the police in the Northern Territory for almost 35 years of his 49 years’ service to the Police Force. Although it was part of the South Australian police force, the Northern Territory body was quite distinct because of the immense distance from Adelaide. Foelsche was given full control over its organisation, including promotions, dismissals, reductions and postings without any requirement to refer to the police commissioner in Adelaide. Although this courtesy was always shown.

He died at 83 years of age and is buried in Darwin.

Foelsche was a true Freemason, exemplary in his Masonic beliefs which were embedded in his DNA - a proud man who contributed so much to the development of the Northern Territory, his beloved Police Force and the immense collection of photographs of Darwin and the indigenous peoples, which has added enormously to the study of the anthropological customs and culture of the aborigines.

And of course as a consequence of the history wars, we are now in this country having to deal with events termed as ‘invasion’, ‘warfare’, ‘conquest’ or ‘genocide’ committed against indigenous people, instead of a relatively minor conflict between European colonists and indigenous Australians. My great grandfather, Mounted Constable William Pascoe Treloar, on my mother’s side, and in the period 1897-1902 was officer in charge of Hawker and later at Balaklava and finally at Port Germein where he died on duty at 52 years of age. I fondly remember my grandmother explaining to me that her father was responsible for dolling out rations to the Aborigines at Hawker and how they would gather at the police station to be given flour, sugar tea and other rations. As a child I pictured in my imagination what must have been such a kindly act by an obviously genial officer.

And so there are now moves afoot to discredit Inspector Foelsche’s memory, by this example of historical revisionism otherwise known as the black-arm band view of history, as coined by Professor Geoffrey Blainey, a corrupted view of our early history and contributes to the growing disregard for the history and cultural heritage of western civilisation. Another Freemason of note of course was the great explorer Brother Charles McDouall Stuart, whose extraordinary accomplishments are also under threat from the same cabal who seem intent on demonising our great past and about which we should be rightly proud.

And it is important when we look at history that we do not fall into the trap of judging events which occurred in the early years of settlement against the mores and standards of contemporary life, or in other words distorting the historical record in drastic disagreement of the patriotic view of history that we all grew up with. My own view is that I see Australian history as largely a success in building a nation and to welcome people from all over the world to make their lives here and to share in the freedoms we cherish.

Brethren, you must be ever vigilant to ensure the honour and reputation of this great man is not disparaged by people seeking to re-write history out of a misjudged sense of intergenerational guilt.

While we all agree I am sure that all was not well with the early days of settlement, it is unproductive to infect every discussion of our nation’s past with this so-called black armband view. 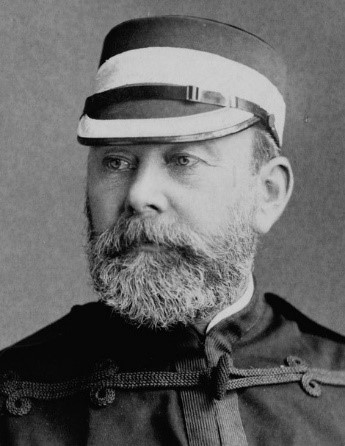